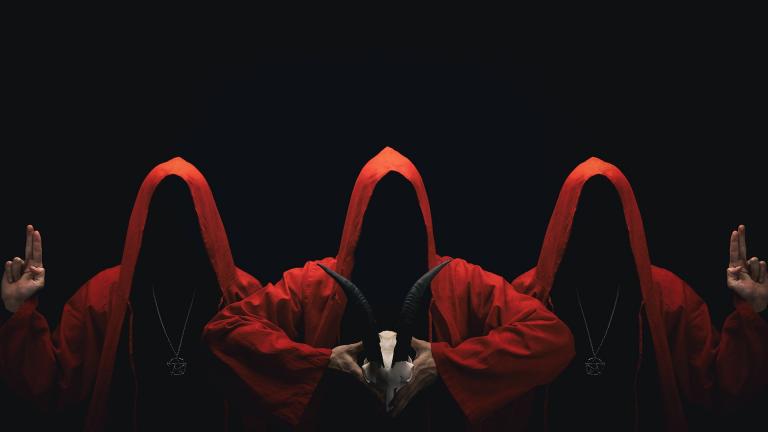 We get attacked all the time online, Mammon tells me that you know you are doing something right when you get hate. I still notice that we get different types of haters.  There are many who identify as Christians who openly attack us online.  Many accuse us of being a cult.

I want to say, I have no problem with the Path of Christianity.  I have a problem with people who feel that spreading the message of God justifies abuse and hate, and feel that it is their job to convert the entire world even at the cost of the mental health and physical safety of others.

Some believe that their interpretation of the Laws of God is above the Laws of Man, so they can lie, cheat, attack, abuse, hurt, commit arson, destroy lives, and that it is justified because they are doing it for their God. It’s a terrible and destructive cycle and it has caused a lot of hurts and in many cases death.  Some say these mindsets themselves are cultish and we all know there have been many Christian Cults out there that have caused death…

There are real cults out there, cults that are dangerous and cults that cause a great deal of damage.  I wanted to create a space that was open and explorative, and one that was as far away from being a cult as possible. I have told all those who have worked with us and been in the coven how important it is to create a space that is about the empowerment of the self.  Everyone who has worked for us knows how important this is to me and how serious I take being accused of a cult.

If there was any evidence in any way that S&S was cultish or was at risk of becoming a cult I would go so far as to allow an FBI investigation to ensure that we were not operating as a cult.  It is something I feel that strongly about and it is something that everyone who has ever worked for me knows.

It still doesn’t stop us from being accused of running a cult.  It is one thing that I have tried very hard to understand, what is a cult?

I looked up the definition of a cult…

“cult – a devoted religious group, often living together in a community with a charismatic prophet leader.  Cults are generally considered to be potentially dangerous, unorthodox, extremist groups by the dominant religious organizations in a society.”
https://www2.palomar.edu/anthro/religion/glossary.htm

Are we a religious group? I like to think that Demonosophy is more aligned with Spirituality and Philosophy.  At its core, it is an exploration of the individual self, that individual’s connection to the dark aspects of the spiritual world, and a path of empowerment with demons and other spiritual beings.

I love Spirituality and all different Faiths.  There is something so beautiful in the diversity of paths we have.  I love the idea of members of different paths having a space to discuss and share without shame, attacks and persecution.  It is a path of sharing, we share our love with demons and the demonic divine.  We also love when others share as well.

I am committed to the Demon Temple till the end of my life, but that is me, it is my path.  Others need to follow the path that is right for them.

Living together in a community… well we all have our own houses, people are free to come and go as they please.  If one Coven member stays with another it is temporary and only to help them out.  We have helped out those who have worked with us in the past and invited them to stay in our homes.  This is something done to help and is never something that is forced.

When we have the Demon Temple people will be free to come and go as they please.  It isn’t necessary to have everyone there, though if people want to live closer there is nothing wrong with that.  I still want people to have their own lives.

Charismatic Prophet Leader… I am charismatic, but not a prophet. I hope… What is a prophet…?

“prophet – an individual who receives divine revelation concerning a restructuring of religious practices and usually of society as well.  Prophets call for dramatic change while priesthoods usually act as conservative forces in preserving long-standing traditions.  Not surprisingly, prophets are usually outside of the priesthood and are seen by priests as irritating, disruptive trouble-makers.”
https://www2.palomar.edu/anthro/religion/glossary.htm

Huh.. this is interesting.  I can see in a way why many who identify as Christians hate us and why they accuse us of being a cult.  This is all in a way starting to make sense why so often Satanists are accused of being a cult.

Restructuring of religious practices and usually of society as well… Many Satanists do call for changes in society… We do as well.  We are offering different practices and different methods for working with Gods/Goddesses and Demons, and we are bringing new energies and ideas to the world.

Prophets call for dramatic change… well we are calling for change in society… We want to help people find personal empowerment, help them feel safe being who they are, and give them the tools to explore the path that calls to them.  We want to create a world where darkness is understood and accepted for the beauty and balance that it brings.

A lot of people say there are problems in the world and we need dramatic changes to fix them.

Seen by priests as irritating, disruptive trouble-makers…. This made me laugh because I am seen in this way, I have been my whole life.  I spoke out against injustices, I was seldom quiet.  Most of the online hate I get is because people see me as irritating and disruptive.  You have to be irritating and disruptive to shake up the rules of society and bring change.  There is a saying that well-behaved people never make history!

This is a very broad definition. Let’s be clear, there are real dangerous cults out there that make you give up all your possessions of your old lives, and submit yourself to the leader to pick vegetables or join their bluegrass band (not joking this really happened to a relative of someone I know).  There are groups that demand complete conformity of their members and spread hate (Westboro baptist church). There are dangerous cults out there that have committed murders, harmed others, and caused mass death. A lot of people thought could fall into this definition.

“Cults are generally considered to be potentially dangerous, unorthodox, extremist groups by the dominant religious organizations in a society.”  Reading this it continues to make more sense.

This is why Satanists are often labeled as cults.  We are dangerous to the status quo, we are unorthodox in our beliefs, and we challenge the dominant religions of society.  This… answers a lot of why so many who identify as Christians label us as cults.  I disagree with this definition of what we are, however, this makes sense as to why it happens, and so often. The fact is that our philosophy is one of freedom and not conformity.

I don’t want to force anyone to believe or do things they are uncomfortable with.  I just want to share my path and what I do, and share a love of demons and dark spirituality with those who also are called to the darkness.  If what we teach resonates with others, great! If our teachings inspire another, great! But I never demand people believe exactly what I believe, and if what I teach doesn’t work, then also great!

I want people to find their own truth and confidence and find what works for them.  I also want to help people who are called to understand the darkness and understand their own unique dark balance and their connection to Dark Divinity.  I guess if to some these behaviors is that of a cult because we are in defiance of the dominant religious organization, then so be it.

Society is always changing. We adapt to solve problems and find solutions for what is not working.  It has always been this way; there are people who are afraid of change and what is new, so they resist change.  The reality is that change is inevitable. People are sharing their truth and they are looking to understand themselves and their own connection to darkness, this is a hole in society that is now being filled.

Darkness, in the past, has been shamed and ridiculed, now we are seeking to explore it and understand it, to awaken ancient wisdom and integrate it.  It is going to change society, it is going to bring shifts.  The world has always worked this way.   This is how we grow as a species, this is how we evolve as a society, and it is how we solve the problems before us.  The world isn’t stagnant.  This is how progress happens and how we move forward.

Ideas change the world.  They are the pinnacle of growth, and how we move forward.  Sharing one’s beliefs that differ from another is different than demanding blind conformity (which is what a cult does). That is where the line is drawn and that is a line that we never want to cross. Healthy debate and discussion are fun! Forced conformity and using guilt, shame, and gaslighting to force your beliefs on another is wrong!

Cults are dangerous. They demand blind conformity and stripe away the essence of the individual for blind submission to the ideals of one leader with no debate, no individual expression, and no exploration of ideas.  That is not what we do here, we want open discussion, open dialogue and to create a space that is acceptable for all.

Your Leader has Spoken… Also, while I was looking for definitions I found this article which gives an excellent overview of Cults from an Anthropological perspective. http://anthropology.iresearchnet.com/cults/