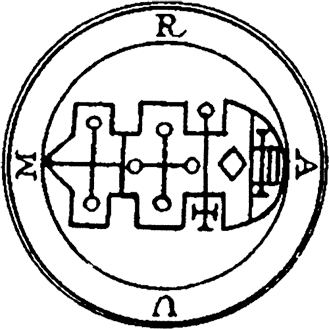 “The Fortieth Spirit is Raum. He is a Great Earl; and appeareth at first in the Form of a Crow, but after the Command of the Exorcist he putteth on Human Shape. His office is to steal Treasures out King’s Houses, and to carry it whither he is commanded, and to destroy Cities and Dignities of Men, and to tell all things, Past and What Is, and what Will Be; and to cause Love between Friends and Foes. He was of the Order of Thrones. He governeth 30 Legions of Spirits.”

“Raum is the Fortieth Spirit of Solomon, who is a Great Earl. In the black mirror and the evocation circle he appears in the form of a crow, but will appear in a human form if commanded. Raum was said to steal treasures from a King’s castle, however this may be translated into an intiatory context as gathering secrets astrally, from others if need be. He is also capable to destroy dignities of men and primarily acts as a divinatory spirit. He was of the Order of Thrones and still governs 30 Legions of Spirits.”

“Original Purpose: Stals treasure from kings. Destroys cities and dignities. causes love between friends and foes. Tells all things past, present, and future.”

Author’s Notes: Invoke Raum to take down a mighty foe or adversary. Raum is also helpful in legal battles against large conglomerates. Seek Raum’s wisdom to find personal strength when the odds are against you.

“(41) Raum, or Raim is a great Earl, he appears in the form of a Raven, but at the will of the exorcist assumes a human form, He has stealthily stolen “mire” out of the kings house and can transfer it to it’s designated place. He can destroy cities and has great despite unto dignities. He sees this past, present and future. He reconciles friends and foe and was in the order of thrones. He governs 30 legions.”