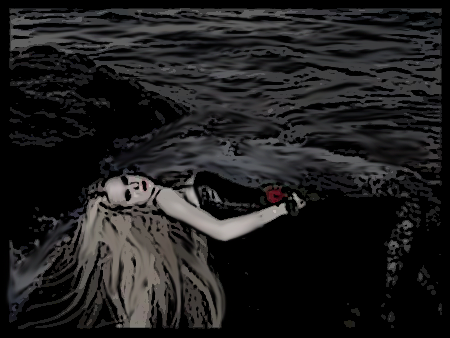 Darkness was all around me, there was no light so I couldn’t even adjust my eyes to try to see anything. It was pitch black darkness. I breathed heavily, overcome with my own fear. It was like things were just going from bad to worse. There was something behind me to, it wasn’t moving, I wasn’t moving there was perfect stillness. There were no distractions, just me and my mind and the creature behind me.

Fear was gripping me, fear of the unknown, fear of the hidden danger, it was overwhelming me. My anxieties were unreal, they were torturing me, and tormenting me. I was trying not to move, trying not to shake, I was gripped with fear and the creature behind me was so close, so close to me! I could feel the breath. Why was this happening? I was stagnated I didn’t want to move, I was trying to hold onto that moment and I didn’t want it to change. I didn’t want it to, I was trying not to breath heavily, but I was so panicked and scared it was impossible. I was waiting for this creature to strike at me, but every breath every moment that passed there was nothing.

I closed my eyes, I wished again this would all go away. No I have to stop thinking like that… but I am scared!… stop it mind!!!… No this is too much I can’t do this!!!… ENOUGH we made our choice….. everyone betrayed us!!!….. no they didn’t!!… They had to, look how much pain we are in!….. We chose this, pain comes with growth!!

I was fighting with myself, I really was going mad. It was like two sides of myself were at war with each other. It was like the danger was so close and I was paralyzed by not knowing what to do. I stayed perfectly still. My mind going back and forth, I was unable to really figure out what the best course of action was. The fear was paralyzing me. I had to do something. I had to take action… or did I???

What was this fear? Fear is a sense of danger, it can serve us if it is channeled and understood. Fear is not a bad thing for it guides us and helps us avoid serious danger. The problem, though, is that fear often becomes over stimulated, there is nothing wrong with stopping and looking at the fear. Seeing if there really is danger. I needed to take back control of the situation, my life was being overrun with fear of the unknown, fear of things that would probably never happen and I had to take this back. There was so much fear, too much caution, and it was paralyzing me. Fear is a warning of danger. When it reacts to everything and even things that haven’t happened and are unlikely to happen it, controls you. That was why my stomach was a mess, my fear and my gut was out of control. I had to stop this. What was I afraid of?

I looked at what had happened.. I was afraid of it happening again. But it had already happened. I remember a conversation with Mammon.

“Put your attention on what you want and you will manifest more of it.”

I had to stop this. This fear was destroying me. I forced myself refocus on myself. I was going to take myself back. The fear was overwhelming me, it was consuming me and I was the only one who could stop it. I focused on the moment. Nothing was happening. Nothing bad had happened. There was nothing going on right now.

I had to ground. How can I ground in the ocean? How does one ground at sea. I though of another spirit guide of mine who resides in the water. Water is a cleansing and healing force. There are sand and rocks at the bottom. I thought of the rocks at the bottom of the ocean. How does one ground when they are drowning in emotions and fear. That was the question, that is what I needed to embrace. I stopped and breathed.

Breath!!!! Azazel always told me to focus on my breath and my root chakra. My point of grounding, my connection to the Earth no matter where I was or what was going on! Focusing on breath I would ground myself. I shifted my attention to my breathing, and worked on taking slow deep breaths. I allowed myself to get into the rhythm of them. I focused on my breath and root chakra.

I remembered the ritual of grounding and connecting to the root chakra, aligning all the chakra’s in divine power. I focused and realized how blocked my chakras all were. I was an absolute mess! I breathed in the energy, working through each chakra and removing as many blocks as I could. I had to get enough to allow the divine energy to flow through me. I started from my crown chakra and worked down to my root.

Breathing helped, I felt calmer and more relaxed. Grounding was a good call. I needed to get myself back, this was ridiculous. Why was I even upset again..

Oh right, I was in a boat with a strange creature, darkness all around and in an endless ocean of emotional turmoil…

My attention turned back to my surroundings.

Wait… was it closer… The breathing sounded closer. Oh no, I spent so much time with myself it was now closer. I stopped and listened. There was nothing but silence. I remembered something Mammon told me. Fear and Curiosity can be partners, when the immediate danger is removed, curiosity can take over and help one to understand the situation. Dangers are often nothing more then illusions. I heard Mammon’s words.

“Shift your energies to curiosity, become curious of the situation.”

He was right. This danger was in my mind, so was the fear. I took a deep breath in and turned around. I faced her, i became curious about her, she was interesting in her energies, she was fascinating. It was like the first time I met the demons, I was curious. There was nothing to fear here, absolutely nothing it was all in my mind.

No.. this was not what I wanted. I again felt another piece of myself come alive and I realized I had to face myself. I had to honour myself and I realized she was me. I grabbed her and hugged her. We locked in a deep hug and I realized I needed to accept her, and accept myself completely. It was the next step to healing. This creature, all these emotions they were me, and they were a part of me. I sobbed realizing this. I focused on her, and I allowed her to merge with me. From the darkness comes strength. As we merged I felt myself black out. The next step on this journey was completed.

To be continued…Crossing the Abyss with Leviathan – The Storm