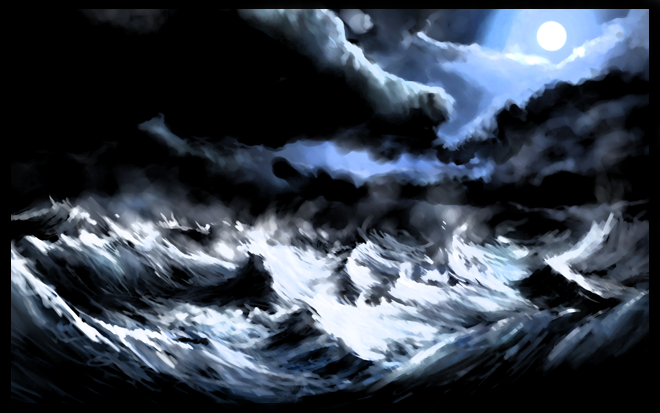 I came to again. The sky was weird but I could see it, it was still dark but there were outlines and it was no longer the intense black void. I looked around scanning and trying to see if there was anything, but the sky stretched on for ages. They I felt a cool breeze blowing across the water…

They came too, the storms they came, sometimes it seemed like one after the other. The emotional upsets and triggers were firing, sometimes it seemed like daily. The storms rocked my boat and battered it. I was tossed through the waves and soaked to the bone, shivering and holding on for dear life. Sometimes I couldn’t even think, I just gripped to something and hopped that at the end it would all be ok. My little boat getting tossed and thrown through the water.

I was so angry, I was furious, but then at the same time I was nothing more then a wounded animal, striking out from my primal states. I had to be careful. I had to keep my head. This place offered me release though. I could lose it here, I was lost anyway, a drift forever in the eternal black ocean. just drifting, My anger threatening to overtake me and destroy me.

I can remember how fast friends words turn to danger, It wasn’t their fault, it was mine, my perception, my pain. I remember the long nights, the tears, the pain. I am just grateful to have such amazing friends who walked with me through that time, who held my hand when I was falling apart and who never walked away no matter how much the insanity took hold.

Everyone can love you when you shine. But let me tell you, you find those who have your back when you fall, and the harder you fall the more you know who those friends are. Those ones who stand with you are your tribe! those ones who stick with you through the darkness are your sisters! your brothers, they are the ones who accept you as whole!

Superficial relationships are common, when you can go deep into your own insanity and have a friend not only walk with you, but fight with you, call you on your shit and be willing to hold that lantern as you walk through the darkest regions of your soul. Those are your friends, your family. I had a strong family. I did. I have amazing friends. I also remembered the demons.

Where were the demons. I saw them as my family, they had always been there from the time I was a small child. The storms whipped my boat and I tried so hard to hang on, but the storm was intense. I realized that it was caused from. I realized it was my emotional turmoil and worrying to much about what others thought and not about who mattered. Then it happened.

I suddenly realized how angry I was, and then my focus narrowed. I was angry, so angry and I lashed out at him. I lashed out hard. I yelled and screamed and hollered, I accused him of betraying me! of leaving me! in my time of need where the hell was he!!! HOW COULD HE!!!! Where did he go!! YOU PROMISED ME YOU WOULD ALWAYS BE THERE!!! I called him every name under the sun, I screamed at him, my rage was all consuming.

Anger is an emotion that guides us, it shows us when we have been wronged and it challenges us to take back our power. When we are angry we lose control, it is a shedding, a releasing. We lose control to break the old bonds, to step out of what we know, and it also lets us know when we have been wronged. often times our anger is misdirected and misguided. Mine was. I had to focus, I had to focus back on why I was angry. I saw myself. I was angry at myself for allowing this to happen, for being weak. I had a chance now. I had a chance to take back control, to reclaim my power, and to stand by it, never allowing one to take it from me again. I had to claim my anger and bring my power back to myself.

I focused on my anger and faced it, I faced the rage and the aggression that was in me. I honoured it, it was sacred in a way, the anger that flowed through me was my power, it was just misdirected, it was misplaced. I honoured it and let it take over, I let myself stand in my anger, ready to reclaim my power. As it consumed me I blacked out.

The cold water snapped me back. My boat! where was it!!?? I was in the water, the waves still washing around me as I was trying to swim to the surface. I broke through, the storm still howling around me. The waves and currents pulling me under, and tossing me around like I was nothing more then a rag. Now it was a fight for my life, my boat was gone, I was left alone in the ocean. It was just me and the black ocean now.

I was swimming and trying my damnedest to stay afloat. I was trying to swim in the water but the waves crashed into me. They pulled me under and it seemed that every time I caught a breath that another wave crashed into me and I was pulled under. It was becoming harder and harder to stay afloat. I started to panic, my boat was gone and I was on the verge of drowning.

I felt like I was being punished! Like I was being tortured! It was just going from bad to worse and there was no end in sight and now I was lanterless, boatless, and in the middle of an ocean in a raging storm. Wonderful…. I was pulled under the water and I kept struggling trying to get to the surface, trying to breath, but it was impossible now. I was running out of breath and the struggling was coming making it worse. I felt myself sinking, I was trying and fighting so hard and the emotions were taking me, they were consuming me, I couldn’t fight anymore, I couldn’t rise up anymore! I felt myself black out as the fight left me.

To be continued… Crossing the Abyss with Leviathan – Death