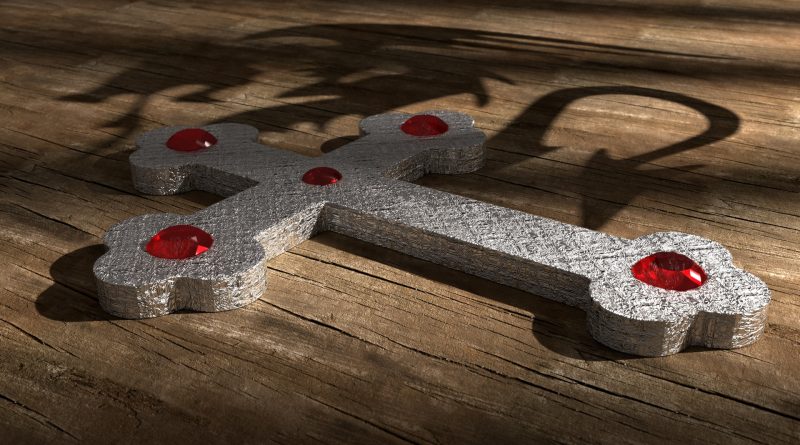 The cross for ages has been associated with Christianity.  It has long been the symbol of the Crucifix, and the faith of Christianity, but its true meaning takes us back to pagan times and it has very different roots.  For you see Crosses are not just exclusive to the Christian faith, they actually can be found across many religions and many cultures.  The cross in essence means a crossing, a crossing of our world and the spiritual world. So before we are all so quick to condemn the crosses, they actually can be a powerful magical tool and they can be incredible in opening and gaining access to the spiritual world and the different spiritual planes.

The horizontal line of the cross represents the plane, in some cases it is a spiritual or underworld plane, but it can also represent the physical plane that we walk in.  The vertical line is the path of spirit, the different section of the spiritual world and the path that one can take.  Depending on where the horizontal and the vertical lines intersect reveals the energies and the realms of the cross.

A Cross that intersects in the higher regions represents the higher spiritual planes.  The planes of ascension and the planes of Divinity.  These higher spiritual planes of existence are the realms of divinity and for those of us on the Left Hand path, still an access point to access and work with the demonic divine.  Divinity is both darkness and light and the demonic divine is the dark aspect of divinity.

Crosses can be used to connect with and work with the demonic divine as well as calling in the energies of the dark divine. They are great for raising the energies of a ritual space and for flooding the area with dark divine energies. This can shift theplane and allow us to access different realms within the spiritual world.

Crosses are great for rituals where you wish to access the dark divinity and call in the energies of the demonic divine. They can help you bring in energies to ascend your essence to the higher planes and do work from those regions.  I do work with crosses and actually have very specific ones that I use for various rituals involving the demonic divine.

A cross the intersects in the lower region of the cross, also called the inverted or satanic cross, represents the Underworld and the lower planes.  These are areas of the abyss, of chaos and the darkness that resides in the underworld. Inverted crosses are great for rituals where you want to charge your ritual space with these energies and also gain access to the underworld regions.  The Abyss, the void, the essence of chaos and the Underworld all can be drawn in and accessed through inverted crosses.

So you can see depending on the cross, they can have various uses. There are other crosses as well and it is important to note that each unique cross will have it’s own energies and it’s own associations.  They are all different and they have different vibrations and energies.

Crosses are not just exclusive to the Christian faith, though that is what they are most known for.  They can be a powerful magical tool that can greatly enhance your magickal rites and rituals.  If you would like to work with crosses and add them to your work, the best thing to do is to first figure out the type of energies you are going to be working with in your ritual. You would then figure out how the cross can enhance those energies.

The high vibrational energies of dark divinity can be a great addition to darker rituals, so do not feel that you are limited to inverted crosses for darker rituals. The same goes for the necromantic energies of the inverted crosses which can be great for spirit communication and communicating with deceased relatives.  There are many uses for crosses in rituals and in order to figure out which one works for you, it is best to play with them and figure out how they align with your energies.  Many faiths have their own crosses and those crosses have their own symbols.  It is a very powerful tool and we recommend learning about the different crosses before you begin using them.  Learn about their history, their meaning, how they relate to you and also learn about their energies and where they rose from.  Many times there are deeper meaning then what is on the surface.

Part of walking the left hand path is learning to undo what the world tells us.  We have all grown up with crosses being exclusively symbolic of the church and that has caused many of us on the Left Hand Path to avoid them.  But because of that, we are actually limiting our magickal practises and excluding a very powerful tool from our work.  Crosses have been around since the Pagan times. They have been used in many different magickal rites and due to their construction, have incredible magickal properties to them.

Though they are a very important part of the Christian faith, history has shown us that they are not exclusive to the Christian faith.  So if you feel called to the shape of of the cross or feel that it can enhance your magickal practises don’t feel that just because you walk with demons that you cannot use them.  The Demons, because they are divine beings themselves, are not bothered by religious symbols as is seen in many films.  Working with the crosses will not hurt or harm them in any way.  Inverted crosses are naturally associated with Satanism and demons, but even normal crosses can be used when working with them.

They are a powerful tool and remember, it is about how you use the tool.  A cross used to open the energies to your demon’s realm will not harm them or be disrespectful to them.  So don’t be afraid to experiment and make use of what you have available to you.  A wand and a blasting rod are the same shape. One is used with the intent to harm while the other is used to direct energies.  So long as you approach the demons with honour and respect you will not have a problem working with them and making use of crosses in your rituals.  They are a powerful tool and they can open up new areas and energies for you and your work.